We provide an ova package containing a virtual machine with all the required software installed. Please refer to Overview of the ParTypes Artifact.

We start with a simple example: calculating pi via numerical integration. Pi is the area under the graph of a certain function in the interval [0..1]. The program works as follows:

Process rank 0 decides on the number of intervals and broadcasts this value among all processes. Each process calculates its local sum. In the end, a reduce operation sums all the partial sums and delivers the result at process rank 0. This process may then print the result. The protocol looks as follows.

Protocols are introduced with the keyword protocol followed by the protocol name. In this case there are two operations in sequence: broadcast 0 integer says that process rank 0 broadcasts an integer; reduce 0 sum float collects a floating point number from each process, sums them up, and delivers the result to process rank 0.

So now we have a protocol and a C program; there remains to check the conformance of the C code against the protocol. We need:

VCC limitations force us to adapt the C source code. In particular, VCC does not support:

Thus, we must filter out in pi.c the lines that contain printf, scanf, and also all those that contain floating point operations (assignments to variables h, sum, x, and mympi). Using the #ifndef _PARTYPES ... #endif macros to do the filtering, allows the code to be compiled as a normal program. In this process, we should preserve the control structure of the program, plus every MPI call and variable declaration. The resulting program must still compile and exchange the messages the original program was intended to.

Finally, we need include the the protocol in VCC format. The final result should look similar to this. We can now run VCC after these transformations, e.g., through the mpiv.bat script that is bundled with ParTypes VCC library. VCC reports no errors, indicating that the program complies with the protocol, as shown in the screenshot below.

Rather than installing VCC one may use the VCC page at Rise4Fun. Rise4Fun does not support loading multiple files or headers. Instead, concatenate partypes.h, the protocol in VCC format, and the code after transformation into a single file. Paste the contents of the file into Rise4Fun and run.

The finite differences algorithm illustrates the typical features present in a parallel application. Given an initial vector X0, the algorithm calculates successive approximations to the solution X1, X2, ..., until a pre-defined maximum number of iterations has been reached. A distinguished process (usually process rank 0) disseminates the number of iterations via a broadcast operation. The same process then divides the input array among all processes. Each participant is responsible for computing its local part of the solution. Towards this end, in each iteration, each process exchanges boundary values with its left and right neighbours. When the pre-defined number of iterations is reached, process rank 0 obtains the global error via a reduce operation and collects the partial arrays in order to build a solution to the problem.

In the beginning, process rank 0 broadcasts the problem size. We write this as

That process rank 0 divides X0 among all processes is rendered in ParTypes as a scatter operation.

Now, each process loops for a given number of iterations, nIterations. We write this as follows.

nIterations is a variable that must be somehow introduced in the protocol. The variable denotes a value that must be known to all processes. Typically, there are two ways for processes to get to know this value:

For the former case we could for instance add another broadcast operation in the first lines of the protocol. For the latter, the protocol language relies on the val constructor, allowing one to introduce a program value in the type:

Either solution would solve the problem. If a broadcast is used then processes must engage in a broadcast operation; if val is chosen then no value exchange is needed, but the programmer must identify the value in the source code that will inhabit nIterations.

We may now continue analyzing the loop body. In each iteration, each process sends a message to its left neighbor and another message to its right neighbor. Such an operation is again described as a foreach construct that iterates over all processes. The first process is 0; the last is size-1, where size is a distinguished variable that represents the number of processes. The inner loop is then written as follows.

So, now we can assemble the loops.

Once the loop is completed, process rank 0 obtains the global error. Towards this end, each process proposes a floating point number representing the local error. Rank 0 then reads the maximum of all these values. We write all this as follows.

Finally, process rank 0 collects the partial arrays and builds a solution Xn to the problem. This calls for a gather operation.

Before we put all the operations together in a protocol, we need to discuss the nature of the arrays distributed and collected in the scatter and gather operations. Scatter distributes X0, dividing it in small pieces; gather collects the subarrays to build Xn. The arrays in scatter/gatherk protocols always refer to the whole array, not to the subarrays. So, we instead write:

Variable n must be introduced somehow (by means of a val, broadcast, or allreduce). In this case n is exactly the problem size that was broadcast before. So we name the value that rank 0 provides as follows.

But n cannot be an arbitrary non-negative number. It must evenly divide X0. In this way, each process gets a part of X0 of equal length, namely length(X0) / size, and we do not risk accessing out-of-bound positions when manipulating the subarrays. So we would like to make sure that the length of X0 is such that length(X0) % size = 0.

For this we use a refinement datatype. Rather that saying that n is a natural number we say that it is of datatype {x: natural | x % size = 0}.

Putting everything together, the protocol for the finite differences algorithm is as follows.

Protocols also allow for a restriction on the required number of processes. For example, the finite differences protocol could have been written as follows,

Try adding (size >= 1) to the protocol example above, and see what happens when you press run.

The topology underlying the protocol for the finite differences is that of a ring: a linear array with a wraparound link. If a different mapping of ranks to processes is to be used, a new protocol must be derived.

It turns out that the language of protocols is flexible enough to encode topologies in integer arrays. Such a topology may then be made known to all processes, in such a way that processes exchange messages as per the particular topology.

This flexibility is particularly useful for applications that dynamically adequate the protocol to, say, the load of messages exchanged.

A datatype of the form

encodes a one-dimensional network topology, where t[x]=y means x is a direct neighbor of y: each node has one direct neighbor (a number between 0 and size-1) that is different from itself.

Such a type, call it D, can be distributed among all processes by, say, rank 0.

Thereafter each process can exchange a message with its neighbor, as in:

For example, a right-to-left ring topology of length five can be encoded as [4,0,1,2,3]. A complete protocol for this topology is as follows.

The encoding above requires all processes to have a direct neighbour. How can one encode a topology when this is not the case? Think of a star or a line.

One possibility is to weaken the above condition on the elements of the array, while strengthening the subsequent message passing loop. We could for example drop the restriction that t[y]!=y and encode a right-to-left line of length five as [0,0,1,2,3], a 0-centered star as [0,0,0,0,0], and a full binary 0-rooted tree of depth 3 as [0,0,0,1,1,2,2]. In all cases, rank 0 has no direct neighbor. And this causes a problem if we try to send a message from i to topology[i], as in the above example.

Given that the topology is a data structure known to all processes we can make use of a primitive called collective choice. We start by broadcasting the topology and enter the loop as before. Then, within the loop, a message is exchanged only if the topology array contains a valid entry. 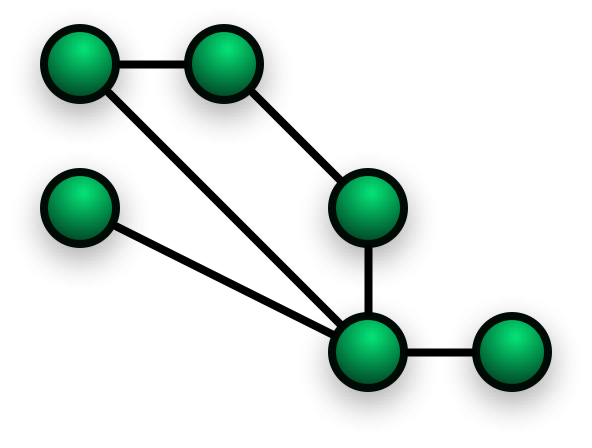 could be encoded with two arrays, one for the sources ([0,0,1,2,3,4]), and another for the targets ([1,4,3,4,4,5]). A protocol where rank 0 broadcasts the two arrays and then each process exchanges one message with its neighbour can be written as follows.

Describing the number of processes

The special variable size denotes the number of processes. Its type is inferred from the protocol as follows:

What if we want to say that the number of the number of processes is even? One can add a proposition in the signature of the protocol to describe the type of size. For example, in the following protocol,

The syntax of datatypes

Datatypes in ParTypes are of the form integer, float, D[], D[i], {x:D|p}, natural and positive where D is any datatype, i is a term, x is a variable name, and p is a proposition.

The first two, integer and float, are primitive types, equivalent to int and float in the C programming language.

D[i] is an array type, an ordered collection of values of type D that can be indexed, with i being an expression denoting the length or size of the collection. The i parameter is optional. A datatype of the form D[i] abbreviates {a: D[] | length(a)=i}. Due to limitations of the implementation, types of the form D[][] are not accepted. One cannot have an array of arrays.

ParTypes supports a large number of operators for propositions and terms. Floating point expressions are not supported.

The length operator can be used to restrict the size of arrays in refinements. For example: {x:integer[] | length(x) % 2 = 0}